Quick summary: I'm playing for summer theatre at a playhouse in northern Ohio*. Time has blurred together and I have no idea what day it is. Since arriving we've had auditions for the first two musicals and a play (two shows left to audition). They cast the shows yesterday, and rehearsals began this morning. Our rehearsal schedule is 8:30-11:30, 1:30-4:30, 7:00-10:00, w/meals and sleep tucked in between. I've been prepping two shows, "Do Black Patent Leather Shoes Really Reflect Up?" and an Irving Berlin revue called "The Melody Lingers On."
There are different challenges with each score. Black Leather is a (partially legible) handwritten score with several rock numbers, several swung numbers, and some church music references. The large group number harmonies get confusing, so I've taken to color-coded highlighting of different voice parts for easier reading. We start the Irving Berlin this afternoon. There is no show CD (although there is a CD called "The Melody Lingers On" - that's not it), so I've researched youtube, itunes and emusic for pianists who play Berlin with the right feel. So far I've liked: Willie "The Lion" Smith's version of Alexander's Ragtime Band and William Bolcom/Joan Morris' Berlin CD Blue Skies. The score has a lot of boom-chick writing (as in quarter notes LH-RH-LH-RH), so its up to me to 'fill it in'.
I love summer programs like this - everyone is committed to what they are doing, rehearsals are focused and I get a lot of practice time when I'm not in rehearsals. Lately I've been practicing a lot of stride piano, which is getting easier (slowly) and also different scales (pentatonic, etc). Other than that, I have a 24-hour gym nearby, free room and board, and library computer privileges. More randomness: because this is Biker Week, there have been nonstop influx of men on hogs.
*There are no gay midgets named Karl.
Posted by Billie Whittaker at 9:47 AM 4 comments

A Summer in Ohio

Just a note to say that I may be absent for awhile (possibly until August). I'm leaving to play summer stock at the Huron Playhouse and may not have gobs of spare time. Or a computer.

Enjoy your summer :)
Posted by Billie Whittaker at 6:10 PM 0 comments

I've been tinkering with the poster idea, mainly because it makes me giggle. It was inspired by this poster which I had as a teenager, and is mainly contains inside jokes for anyone who is or knows a Collaborative pianist. Anyway, this is the latest incarnation. Suggestions are appreciated. 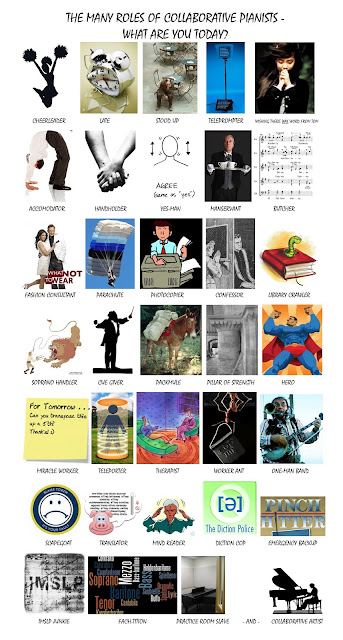 Posted by Billie Whittaker at 10:02 AM 2 comments

I played a lot of Jason Robert Brown last semester, both 'Songs for a New World' and 'The Last Five Years' (The Last Five Years was the most fun I've had doing a show). For research I watched a lot of his stuff on Youtube, and in addition to discovering I now have a huge crush on Norbert Leo Butz, I found something that made me smile. Its an old video of a teenage JRB playing and singing. If you know his stuff, you'll recognize the song they're playing, although the lyrics are different.

I've also been listening to 'Wearing someone Else's Clothes' a lot lately. I wish the score were available (I discount the anthology - its incomplete) - probably it'd be a good transcribing challenge. It's all great, but I really like the song I Could Be in Love With Someone Like You. The song was supposed to be in the Last Five Years, but it was replaced by Shiksa Goddess after his ex sued him.

He's also got a blog, if you are interested.

Posted by Billie Whittaker at 9:16 AM 0 comments