Get your own Bach, Beethoven and Mozart action figure! 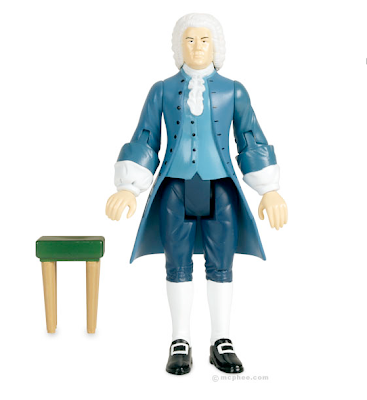 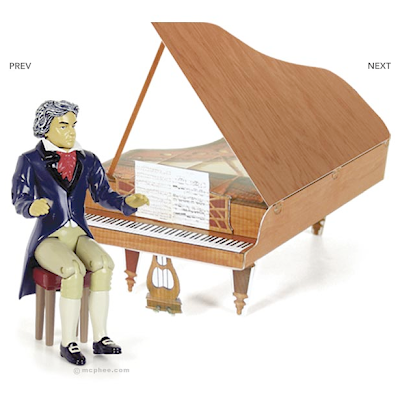 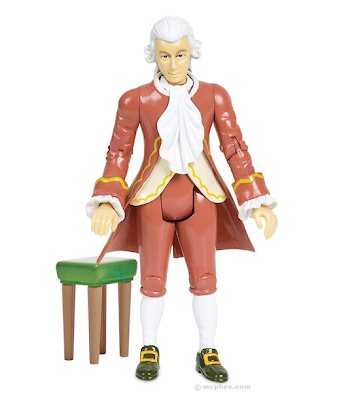 Mozart Action Figure
You can also get Wagner. Or a Viking Helmet.
Posted by Billie Whittaker at 8:21 PM 0 comments

Switching between classical accompanying to MT and pop song accompanying is a skill that never ceases to amaze me in its complexity. It seems simple enough – both use pianistic chops, both have singers and little black dots on a page – they’re the same, right? Nope, that is like saying a great dane is the same as a great danish: they share similarities on paper, but not so much in actual life. In many ways, MT accompanying is as much a learned skill as classical, except that it isn’t really taught.

Classical collaborative pianists (or CCPs) and the military share a common belief: leave no man behind. Or in our case, leave no partner behind the barline. Our training is about being in sync with cohorts by watching for visual cues and listening for the placement of breaths, consonants and vowels. So when MT vocalists, say, ignore the written notes and rhythms of their melody line, a CCP (initially, at least) has several reactions, most of which need to be stifled. For example: say the singer is all over the place with the placement of rhythms. Your instincts are screaming to speed up, slow down or jump to the beat where the singer ought to be*. Stifle. Or the eye is following notes that are not happening. The kneejerk reaction is to be uncomfortable, judge the singer as incapable of learning music and to try and 'follow' them using the written lyrics. Stifle. It turns out that ‘together’ has a totally different definition in MT land, so we need to play accordingly.


Backphrasing and frontphrasing doesn’t exist in classical music: its a style where the singer meanders freely around either side of the beat, and it messes with CCPs’ heads. CCPs usually pause for breaths, for consonant clusters to be spat out – we are very polite that way. But the proper way to deal with a lot of MT music is to 'keep a steady beat'. It’s a learned skill that largely involves keeping track of where the singer is within the melody while not changing the beat in any way. Its exactly like military movie scenes where the soldier says "Leave me, I will only slow you down" - if you attempt to stay with them, the song just gets slower and slower** (or faster and faster). If you don't soldier on, it can make for a really slow version of “The Impossible Dream”.


Another working pianist's blog commented on her experience (italics are mine):
Do I hear the drums in my head when I play? Good question. ...no. I hear the vocal. This is great for accompanying opera and art song repertoire, which is where my academic training lies. I was taught to listen for singer's initial consonants, in order to fall right on the beginning of the vowel; for the spin of a singer's voice on a held note, in order to shape the underlying instrumental phrase accordingly. A-ha! finally I understand why I have sometimes been able to groove on pop material with singers who generate their own time, but have completely shat myself playing the exact same material with singers who are less rhythmically-solid. Groove-based stuff just involves a different type of collaboration between pianist and singer: In classical rep, it's a 50-50 kind of deal - the singer and pianist take turns being in charge of the rhythm and phrasing. In groovin' music, the vocal line can have some ebb and flow, but the underlying pulse stays totally solid. I can't ignore the singer, but I can't be tethered to their every lyric, either. I must be strong, strong like ox, strong like drums. I must hear drums.
Essentially, for people trained as I was, actively viewing the placement of vowels, breaths and consonants as ‘informative-but-not-necessarily-pivotal-to-where-the-beat-lies’ takes some effort. As for listening to a singer's voice for shaping the phrase underneath - a MT singer sounds a lot different than a classical singer (duh) and they can fake you out in a number of ways.

Then there's the 'interpretation' side of MT playing, in which you pick and choose what to play and/or leave out of the accompaniment (like the singer's part - seriously, I wish they'd stop writing the vocal line in there). A good portion of the rep is an orchestral reduction which strongly resembles a conductor's score (i.e. everything, they put in everything). The skill of 'sightreading' this music is really the ability to immediately find the basic harmonic and rhythmic feel of the song - not necessarily reading the notes on the page. Sight-analyzing is probably a more appropriate name. Great stuff.

*Well, jump to where they should be according to the written music. Which they aren’t following anyway.
**This also happens to unaware church pianists, accompanying a congregation and attempting to 'follow' them. The pitfall in listening to the congregation is the hymns inevitably become dirge.
Posted by Billie Whittaker at 10:37 PM 2 comments 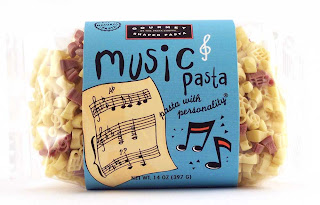 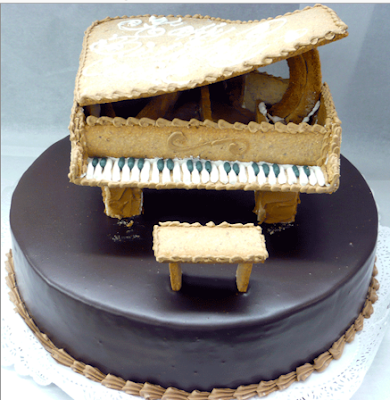 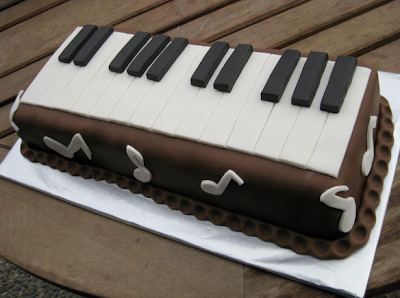 With this show, I'm focusing on two scores: the vocal selections book (VS) and the actual Piano/Vocal pit score (PV). Between the two scores and my ear, hopefully I'll come up with an arrangement that I like. My criteria for "like" is that it sounds full/orchestral, it rarely doubles the singer, and it isn't too awkward to play (in hand span, etc). Since I won't be playing this in a Broadway pit anytime soon, I will be focusing on the songs set out to be solo versions. Keys are mostly the same.

#1) No One Mourns the Wicked - I like the PV score better for this one.
#2) The Wizard and I - For this song, the two scores are 99% the same. Some chords spanning a 10th need to be altered or rolled. When they are mostly the same, I prefer the vocal selections version because it has fewer page turns and is visually much cleaner.

#3) What is This Feeling? - The duet version (VS) lacks the opening 'letter writing' bit and the ensemble echoing "Loathing, etc." Other than that the two scores are the same. Vocal selections preferred.

#4) Dancing Through Life - This song has some inconsistencies between the two scores. Prefer the PV score.#5) Popular
Other than that - pretty much exactly the same. Prefer the vocal selections.

#6) I'm Not That Girl - exactly the same. Prefer the vocal selections.

#7) One Short Day
Other than that - the same. I'm slightly astounded. Still prefer the vocal selections.

#8) Defying Gravity
VS score is great, assuming the keys are OK with the singer

#9) I Couldn't Be Happier - PV score has this labeled "Thank Goodness, Part III." Other than that - the same. Prefer the vocal selections.

The Many Roles of Collaborative Pianists 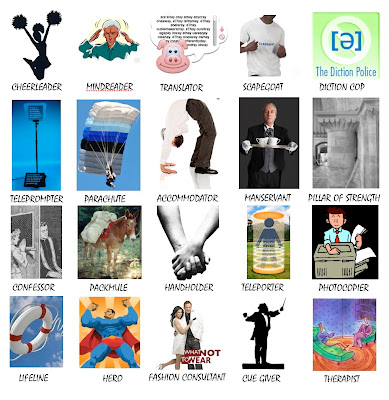 Something Wicked This Way Comes

Stephen Schwartz gets done a lot, and Wicked is still really popular (pun not intended). So I decided to sit myself down and actually learn the whole show instead of sightreading songs like "The Wizard and I" once every couple of months. After pawing through my monstrosity of a filing cabinet*, I discovered I owned several different versions of the same song. Each of the versions had varying levels of readability, so I tracked down what I deemed to be the most pianist-friendly version: Wicked, no melody line in RH. This can easily be confused with Wicked, yes melody line in RH, but they are NOT the same.

For me, my life gets a lot easier when the publisher leaves the melody out of the RH, because I can focus on what to play instead of what to leave out. MT singers generally do not want to be doubled, anyway, so I usually avoid shadowing the singer's melody.

This project will take a week or so, so I'll probably have more comments on scores as I go.


*I am a CP geek. I save most photocopied music that is handed to me.
Posted by Billie Whittaker at 2:41 PM 1 comments

Springboarding off last year's Careers for Pianists post, here are some updates for those interested in 'Staff Accompanist' positions:


*Then again, this is the job market practically everywhere.

Ideally, audition pianists* will ask a singer, "What tempo do you take this at?" and then hear the first line sung as the vocalist likes to perform it, with a clear and steady tempo. Ideally. Realistically, however, I often deal with a student suffering from copious amounts of adrenaline. This turns the simple matter of ascertaining the correct tempo into a complete crapshoot.

Very young singers, for example, when asked about tempo, may respond with: "silence . . . (blinking)." I have also heard, "Oh, the usual tempo" and "A medium tempo, please", which is essentially the verbal equivalent of a shrug. The ''Could you sing the first line for me?" route is generally more successful, but sometimes the instruction is interpreted as "What are the first 8 pitches of your song?", which are then sung without a trace of their actual rhythmic values. Or sometimes they will rattle off their song at a breakneck speed, as if you asked "Remind me how the song goes." There's really no way to win, sometimes.

Situations like this have led me to fantasize about carrying a huge bag of metronomes among singers, handing them out like candy. The other solution I've come up with is to learn every song ever written, complete with common interpretations.

But in the meantime, I'll just deal.


*Or any pianist functioning in similar 'little-to-no-rehearsal' situations
Posted by Billie Whittaker at 2:45 PM 1 comments

MT-Land and You, part II

This is just further listing of other shows to check out if you haven't already, common songs in parenthesis:

Avenue Q (Purpose, There's a Fine, Fine Line)
Dreamgirls (One Night Only, And I'm Telling You I'm Not Going)
I Love You, You're Perfect, Now Change (I Will be Loved Tonight, A Stud and a Babe)
Next to Normal (Superboy and the Invisible Girl, I Miss the Mountains)
Spring Awakening (Mama Who Bore Me)
Sweet Smell of Success ( I Cannot Hear the City, One Track Mind, Rita's Tune)
Title of Show (Way Back to Then)
Urinetown (It's a Privilege to Pee, Run, Freedom, Run!, Cop Song)

Additional stuff to check out which is essentially stuff I like, not necessarily stuff that's you'll run into all the time:

Posted by Billie Whittaker at 3:24 AM 0 comments