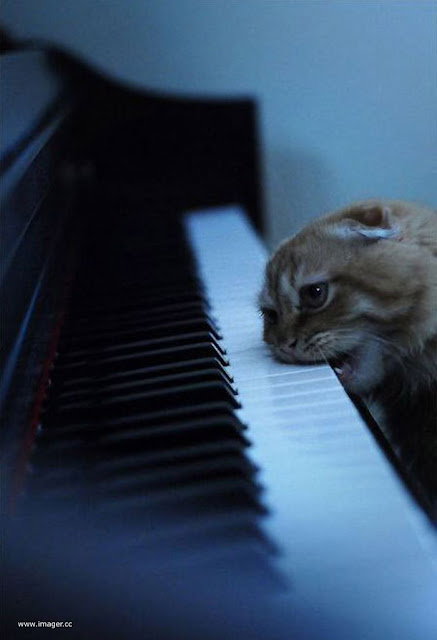 Posted by Billie Whittaker at 3:34 AM 0 comments

Recently I was handed a song to play at a Cabaret rehearsal - a stack of single-sided copies. I spent most of the song grappling to relocate pages from a horizontal location to a vertical one with one hand, while keeping tonality and time with the other. Here was the end result: 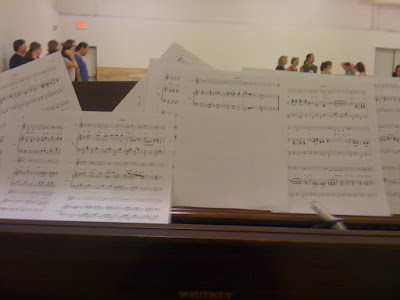 This is what happens when single-sided sheet music is given to pianists. The Moral: hole-punching is good.
Posted by Billie Whittaker at 8:00 PM 3 comments

What are You Doing Next Summer?

You need to start thinking about this now. Fill out online applications, scribble the paperwork, burn the CDs and bug people for letters of recommendation.

To get you started, consider these collaborative piano opportunities:

Posted by Billie Whittaker at 8:52 AM 0 comments

Before leaving the apartment last Saturday, I stared at two items: an adjustable piano bench and a music stand. I debated the likelihood of using either [essential] items at my upcoming wedding gig, and ended up being partially lazy: I dragged the metal stand out to the car and left the bench. This partial foresight and the fact I was 30 minutes early was what saved me.

Upon arrival I was led to a keyboard and a keyboard stand [with a sustain pedal, as per my request]. There was NO visible music stand, though, and I was met with blank faces when I asked for one. Fortunately, the spare stand in my car made it so I didn't have to resort to reading-music-in-one's-lap or music-folder-held-by-stranger survival methods. The very low chair/bench created some challenges - and caused me to mentally curse my laziness* - but I made it work.

I played for a funeral. Unexpectedly, I was required to provide about 15 extra minutes of background music. Due to pure luck, I had included extra music in my folder. This meant I did not have to resort to poorly disguised Christmas carols or Disney tunes** in order to avoid repeated repertoire.

I had to play for three hour rehearsals, and with a [hard] wooden piano bench that was too low. Just in case, I had brought an adjustable, padded bench in my car - which saved my back AND my butt.

The moral: strive to have too much music and a car stuffed with extra stands and music benches -- plus at least one extra metronome (just because).


*On the other hand, parking was located two blocks away from the site. And it was hot. I was cranky enough discovering the lack of stand & trekking the subsequent round-the-block trip. A third lap would not have been the best idea.

**Am mostly kidding - I have other repertoire in my head and in my fingers. However, its amazing what tunes jump to mind when you are scrambling for an appropriate melody to fill the silence.
Posted by Billie Whittaker at 7:20 PM 0 comments