The good news: adapting the skill set is easy once you adjust to having band members and learn the piano’s role within this kind of music (plus getting over the initial shock of seeing letters instead of notes).

The Keyboardists’ Role within the band
You are going from being ‘it’ to being one of many - leave some room for the other band members to play their role. Specifically, adapt to:

All this taken into account – now you can focus on:

The Keyboardist's Role within the music
Because much of the rhythmic, melodic and bass line responsibility has been lifted off your shoulders, you now may play less than you are used to, and in a narrower range on the keyboard.  Previously, your keyboard had 88 keys; now you mainly live in the g2-g4 section of the keyboard.  One of the hardest thing for beginners to do is embrace simplicity - simple chords, simple rhythms and lots of repetition.


Less is more in this situation.  Besides straight quarter notes, here are the two most commonly used comping rhythms in Contemporary Christian playing.  Embrace them:

Simple Chords
Again, this is mostly chord-based playing (often with the above rhythms).  You will almost never play the melody.  For this type of music, pianists use a lot of open 5th, sus2 and sus4 chords.  Focus on minimizing movement across the keyboard as you go from one chord to another (AKA smooth voice leading).  I like to think of it in terms of anchoring a thumb or pinkie.  For example, here's Chris Tomlin's "How Great is Our God".  The first 3 chords can be comped with the exact same notes in the RH (and incidentally, when repeated, gets you through most of the song) 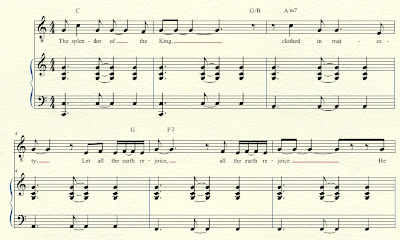 Here is another example: Jennie Riddle's Revelation Song - again, see how you link one chord to the next with the closest voicing (and notice the added sus2s, the rhythmic simplicity).  Learning all of the inversions of the basic triads will help.

That's the basics: simple and repetitive playing, and be mindful of the rest of the band.  The quickest way to pick up the rest of the contemporary Christian musical conventions -i.e. going to higher parts of the keyboard during 'high points' in the music, using rhythms to increase the 'build' to a certain point in the song, etc - is by listening.

Just for kicks, here are links to some of my transcriptions.  For the most part, these songs were unavailable on normal sheet music websites, so I created my own music on Finale.  Enjoy!! :

Posted by Billie Whittaker at 5:42 PM